Studio Wildcard, the studio that never sleeps, has turned its eyes to the ever-growing Xbox One version of ARK: Survival Evolved today, with a slew of new updates and additions. Along with three new deadly creatures, the Woolly Rhino, Dunkleosteus, and Eurypterid, ARK: Survival Evolved will challenge players’ mettle by launching official Extinction Event Servers, adding the Swamp and Snow Cave-Dungeons, and more.rvival Evolved trailer

Key Xbox One Updates Include:

By introducing the unpredictable furry Woolly Rhino, the armored, deep-water Dunkleosteus, and the chitin-rich Eurypterid, Studio Wildcard has introduced advanced ways to attack and defend, bulk up on armor, and to travel the deep seas with greater defenses than ever before. The Extinction Event official servers launching today will reset after each month, with an in-game countdown and dramatic meteor impact to signal the end! These time-limited servers are a great way for new players to start on a level playing field and a challenging gameplay choice for those who want to see how far they can progress before the end of days! Participants will earn badges to mark their accomplishment. 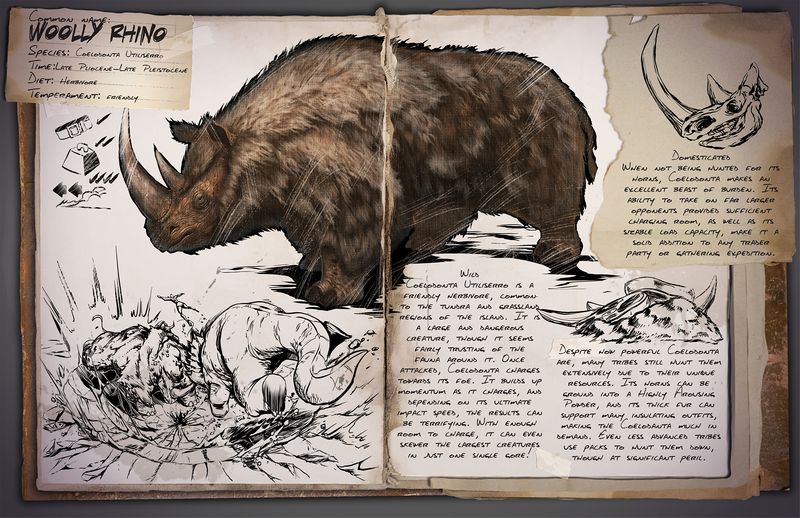 Coelodonta utiliserro: Known as the Woolly Rhino, the Coelodontais usually a large, friendly herbivore but can turn into a dangerous creature when charging its attackers. The Coelodonta builds up momentum as it charges, and depending on its ultimate impact speed, players can skewer the largest creatures in just one single gore! When not being hunted for their horns (ground into arousing powder) or fur (excellent insulating outfits), Coelodonta makes an excellent beast of burden. Its ability to take on far larger opponents (provided sufficient charging room), as well as its sizable load capacity, make it a solid addition to any trader party or gathering expedition. 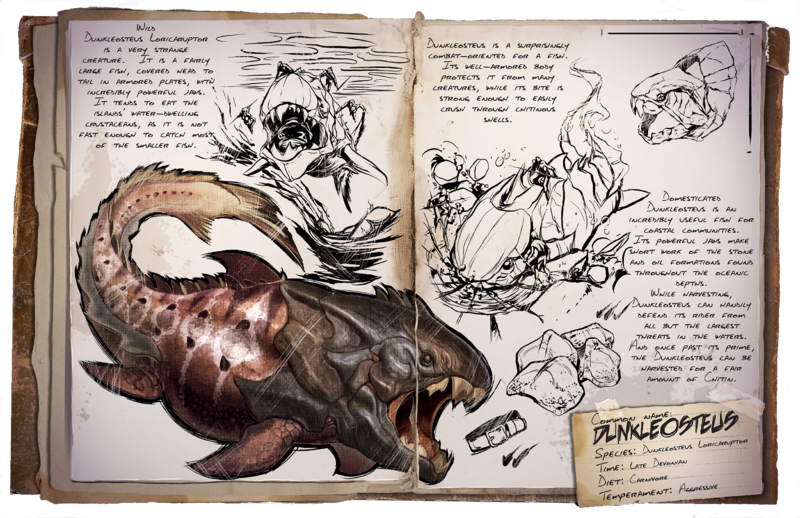 Dunkleosteus loricaruptor: Known simply as Dunkleosteus, this fairly large fish is covered head to tail in armored plates and has incredibly powerful jaws that make great work of stone and oil formations in the ocean’s depths. It’s an excellent battle fish that is heavy with armor and a terrifying bite that tears through chitinous shells. While harvesting, Dunkleosteus can handily defend its rider from all but the largest threats in the waters. And once past its prime, Dunkleosteus can be harvested for a fair amount of Chitin. Jaekelopterus eurypterus: Found only in the deepest watery depths on the ARK, “Eurypterids” are dangerous, adaptable Arthropods that, while not smart enough to be tamed, are rich in chitin and provide a debilitating poison that quickly renders its opponent unable to defend itself. Upon death, Eurypterid provides digestive tracts often containing Silica Pearls, or even have incredibly rare Black Pearls used for manufacturing mysterious technologies. This latter information makes them among the most valuable creatures on the island.

ARK: Survival Evolved will launch in 2016 on Xbox One via the ID@Xbox program, PlayStation®4 with Project Morpheus support, and full release on Steam PC. The game is currently playable in Microsoft’s Game Preview on Xbox One and Steam’s Early Access program, which includes Oculus Rift VR support and an integration of Steam community features such as Steam Economy and Steam Workshop for custom maps and mods. Players can host private/LAN servers and have access to a custom-built version of the Unreal Engine 4 Editor for creating mods. The world of ARK is designed to be modder-friendly and ever-expanding!