Studio Wildcard, the studio that never sleeps, updated ARK: Survival Evolved for Steam PC today with a slew of diseases (and cures!), a 10-seat Dino Taxi ride to the nearest watering hole, and a new Boss Fighting Pit where a massive dragon likes to come and play. Yes, it’s ARK Dev Update #242 and it’s loaded to the primordial gills with cool stuff!

New and experienced players will enjoy two newly added creatures: Diplodocus, a sturdy slow-moving dinosaur capable of carrying as many as 10 simultaneous players, and the horrific Leech, a nasty disease-carrying blood-sucker that attaches to you en masse.

Alongside these new dinos, the new structure Training Dummy displays floating Damage Per Second values indicating how strong each dino attack actually is, while the new mechanic, Permanent Diseases & Cures, enables players to deliberately infect Dodos to use them as Disease Vectors! If you get a permanent disease, it persists even beyond respawn and you need to cure it with an antidote to get rid of it.

On Thursday, June 2, ARK: Survival Evolved officially turns one year old and to celebrate Studio Wildcard is running a one-week “ARK Birthday Event” where players can find Candles from Supply Crates to craft ARK Birthday Cakes. When each candle is blown out, a special message to the players occurs and exclusive items are gifted, including: player and dino party hats, as well as “Birthday Suits” which make the character appear naked (with censor-pixelization). Then devour the tasty Cake for a major XP buff! 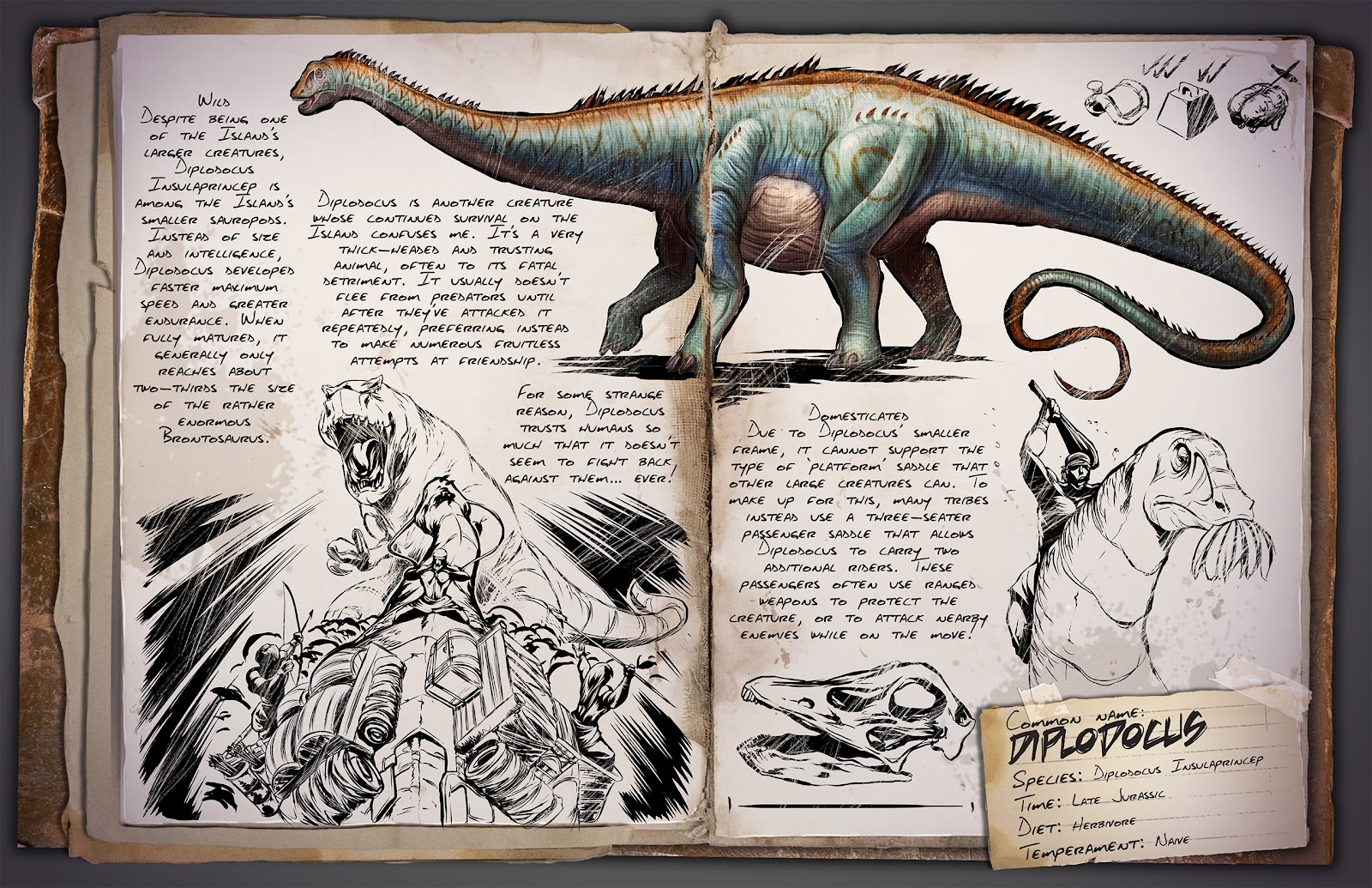 Say buh-bye to Uber — the Diplodocus is a 10-Seater Dino Taxi! Despite being one of the island’s larger creatures, Diplodocus Insulaprincep is among the Island’s smaller sauropods, offering maximum speed and greater endurance compared to its giant brethren. After training, many tribes equip a big passenger saddle that enables Diplodocus to carry as many as 10 passengers. These passengers often use ranged weapons to protect the creature, or to attack nearby enemies while on the move.

Diplodocus, however, is overly trusting, often to its fatal detriment. It usually doesn’t flee from predators until after they’ve attacked it repeatedly, preferring instead to make numerous fruitless attempts at friendship. For some strange reason, Diplodocus trusts humans so much that it doesn’t seem to fight back against them… ever! 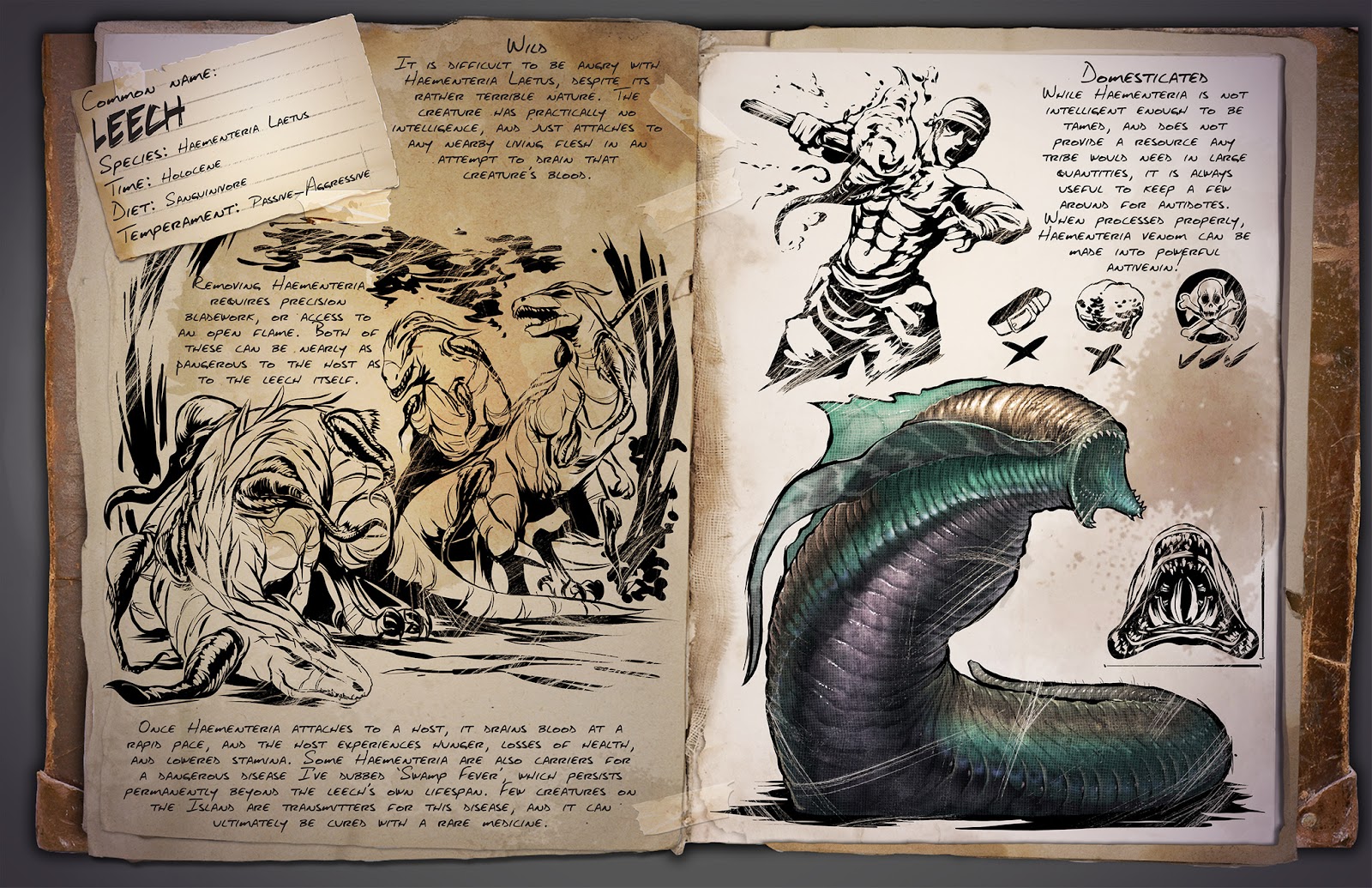 The Leech is just plain nasty. A disease-carrying blood-sucker, Haementeria laetus has practically no intelligence, and merely attaches to any nearby living flesh in an attempt to drain that creature’s blood. Not tameable, the Leech does not provide a resource any tribe would need in large quantities, though it is useful to keep for creating antidotes: When processed properly, Haementaria venom can be made into powerful anti-venom!

Removing Haementeria requires precision bladework, or access to an open flame. Both can be nearly as dangerous to the host as to the leech itself. Once Haementeria attaches to a host, it drains blood at a rapid pace, and the host experiences hunger, losses of health, and lowered stamina. Some Haementeria are also carriers for a dangerous disease known casually as ‘Swamp Fever’, which persists permanently beyond the leech’s own lifespan. ARK: Survival Evolved is in development for full launch on Xbox One via the ID@Xbox program, PlayStation®4, and Steam PC. The game is currently playable in Microsoft’s Game Preview on Xbox One and Steam’s Early Access program, which includes Oculus Rift VR support and an integration of Steam community features such as Steam Economy and Steam Workshop for custom maps and mods.