While we were walking in the B2B-area at the Gamescom when we got a Skype message from a friend of ours. We NEEDED to come over and see his games. About 1 hour later we are enjoying the fresh fruit, sandwiches and a nice drink at the My.com booth. But, wait, we are not here for that, we have some games to check out!

We started with the game Ashes of Creation. A game that doesn’t ring a bell, but then again, we get hundreds of games in our mailbox on a weekly basis. Next to that Gamescom is full of announcements, so who knows why I missed this title, maybe I am just getttoog to old for this 😛

Finally, I am sitting down with the people who are creating and developing the game as we speak. We start off with a trailer and the first thing that I notice is the fact that the way this game looks a lot like Dungeons & Dragons (you know? The nerdiest game ever, which you need to play with a lot of friends). 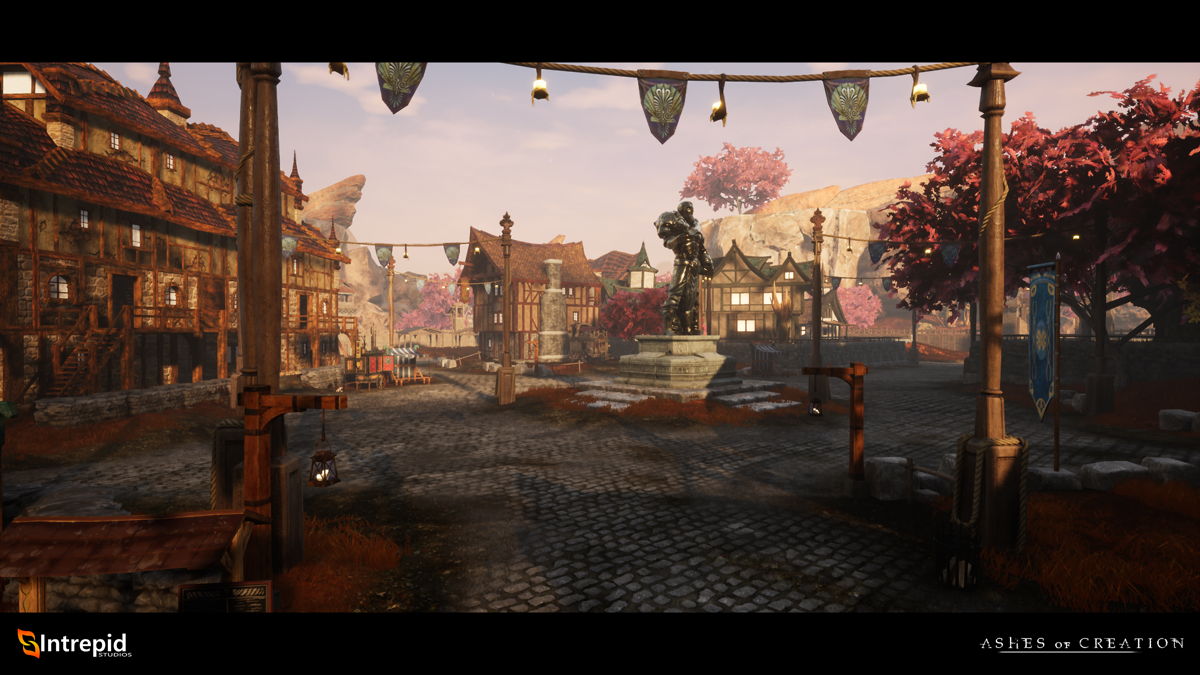 While I am talking with the devs they tell me that a lot of the game is based on D&D, after all, D&D has been around for several decades and is still played by lots of people. But of course, a board game is something else than an MMORPG. The most challenging part is the fact that an MMORPG will go on, even if you are not online.

This doesn’t mean you will end up dying when you are offline for some time, but just that the economy might crash so that you can’t buy the stuff you want. And that also might mean you might need to move to another region and try to get rich again by trading highly south for materials, instead of the others that you still have in the previous region.

This means the world of Ashes of Creation never sleeps, trading might change over time, from having the best deal ever to not getting rid of it at all. Also, as I told you before, the city can change as well. Whenever the economy changes, it will also make people move from or to your city. They are always looking for the best deal after all. This means that your humble village can change into a huge city without you even knowing it whne you are offline.

Something I also noticed as the lack of hotkeys, something I really like. In Ashes of Creation you choose you abilities, and you passive skills. This is needed to make you feel more connected to you character. Also, the secondary abilities is something you can’t use al the time, but it might give you special skills when you are tlaking to people, or it might give you a better hunter instinct when you are looking for people in the game.  This gives you the opportunity to create your character the way you want to.

The best way to play this game is like D&D in real life, make sure you are all classes that support eachother and make a strong and diverse group. This is the best way to make sure your party can overcome everything the game has to offer.

Even though the game is far from release, when I have seen is a game that let it’s univers create around you, it will never have a dull moment when it comes down to Ashes of Creation. You are playing your part in this univer, and your footprint in the game might be small, but it can be from great influence on the game. Who know’s what the future might bring.

The people of Intrepid Studios are now testing the servers, which means they also get feedback from the gamers. Hopefully this will make the game even more awesome and interesting. One thing is for sure, I can’t wait to enter the world that has been created in Ashes of Creation