Over 60 thousand players are currently facing off on two major, universe-spanning sides in the emergence of what is the next great war in EVE Online. It has already produced two major battles, causing amazing drama within the community and a virtual tsunami of player-created propaganda as well. 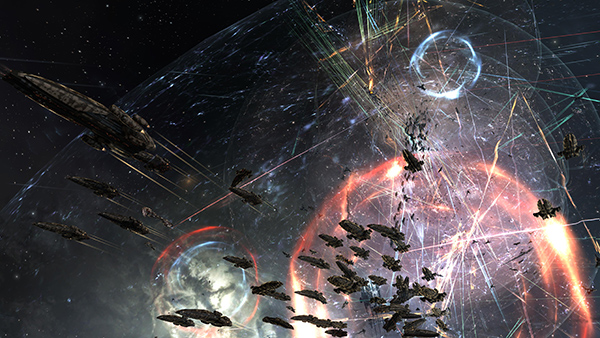 Today we put out a dev blog about the conflict, highlighting the March 28th Battle of M-OEE8–the second-largest battle in EVE Online ever behind 2014’s Bloodbath of B-R5RB. Over 5,806 pilots participated in one single battle for several hours. March 28th saw the most kills in all of nullsec ever in EVE Online history.

We encourage you to read up on the battle, which has all the amazing drama, strategy, diplomacy and all out sci-fi warfare EVE is known for—all completely player driven.

The dev blog captures primary sources, including images, battle recordings, recaps, propaganda, and history lessons—all told by the players themselves. It is your go-to source for covering what is truly a unique gaming phenomenon. War in EVE Online is real, and it is here, with many months of bloody fighting to come. The sides are calling in old allies to resubscribe in droves and recruiting new pilots to the cause.

There are many names floating about for the conflict, but since the relatively new escalation the player community has yet to reach full consensus on whether it’s the Easter War, Northern War, World War Bee, the Mercenary Wars, or something else. Interestingly, it seems to depend on the player’s point of view of the hostilities as to what they should call it.

One thing is certain: the history of EVE is still being written.