During the Unite event we attended in Amsterdam there was a presentation by Chris Keeling, Producer of Master of Orion, and we were lucky enough to have a chat with him and ask some questions about the game. During the interview it was clear that we needed a different approach on this type of interviews, so a follow up appointment was needed to do a proper interview with Chris.

Luckily, after Master of Orion was going live, Chris found the time to have our interview, and the end result of this you can read below.

Inside Indie: Hi Chris, I hope you are doing well and thank you for taking the time to do this interview.

You’ve worked on many combat games, from Panzer Elite and America´s Army to World of Tanks. Where did your passion for military games come from?

Chris: I was already playing (and designing) tabletop wargames in the 1980’s, before I joined the US Army. My military service only fueled that interest even further. My lucky break into the video game industry came while I was still serving on active duty, when I happened upon a post in one of the military history forums I subscribed to. It was an opportunity to write the manuals and do some research for the WW2 tank simulation game, Panzer Elite.

After that I was hooked, and so I left active service after 10 years and went into the reserves, while I started working on video games. Since then I have worked mainly on military-themed games, both because of my experience in that area and my interest in those kinds of games.

Inside Indie: Your previous games all take place on earth, why you choose to go off-planet and work on Master of Orion?

Chris: Well, I am also a huge fan of science fiction. The year Star Wars came out (the original, before they had numbers), I saw it in the theater 13 times in one week. And yes, I go both ways – I love Star Trek too. My love of military games also extends to strategy games in science fiction and fantasy settings, so of course I played the original MOO games in the 1990’s.

As soon as I heard that Victor – our CEO – had bought the IP because of his own love of the original games, I asked him who was going to get to make our version of it. And I may or may not have twisted his arm a little to get the opportunity for myself…

Inside Indie: The list of games you’ve worked contain a lot of military simulation games, yet Master of Orion is a turn based, 4X strategy game. How different was it to work on a game like this?

Chris: Strategy and combat are fundamentals of warfare in any age or setting. While it was different for me to work on a 4X strategy game, as a fan I had already been playing them for over 20 years, so I definitely understood the genre. It was also a refreshing change from modern combat, which sometimes hits too close to home, much as I love tanks and history.

One of the advantages of fictional futuristic strategy is that we can idealize humanity in hopes that we will live up to our best vision of ourselves. That is much harder to see in games that show recent history in all of its grittiness.

Inside Indie: The original game ran on MS-DOS, now you are using Unity 3D to give the game a modern look and feel. How was it to recreate such an iconic game?

Chris: It was very challenging. Every player of the original game has their own special memories of the games, and each has their own favorite race and gameplay feature that makes it “the game” for them. We had to follow our own vision for the game, but we also had to be consistent with the legendary originals. We hired several members of the original team as consultants, and they helped us to keep the soul of the game alive in our new creation.

We had to walk a fine line between making too few changes to the core game and making too many changes to it. We like the way it turned out, and we believe that the game can bring the feeling of the original games to a new generation of 4X gamers.

Inside Indie: One of the great features of the game is the awesome line-up of voice actors, from Mark Hamill to Dwight Schultz. How great was it to work with them?

Chris: It was incredible – not only are they all great actors (and actresses), but they are so passionate, friendly, and excited. They really enjoyed their work, and it showed. We also had really great, funny lines for them. Sometimes they would be laughing too hard at their lines to even speak! And being a nerdy science fiction fan myself, the opportunity to direct the performance of these actors from such famous franchises as Star Wars, Star Trek, and Firefly really gave me goosebumps.

The quality of the voiceovers was so high that it gave the development team even more enthusiasm and added even more depth to the characters in the game.

Inside Indie: There must have been a lot of players waiting in anticipation on this game after hearing about it in 2013. Were they all enthusiastic to participate in the early access?

Chris: As we expected, and braced ourselves for, not all of the fans were enthusiastic. Many were skeptical that WG Labs and NGD Studios had the experience to make the game. They were afraid we might make it free to play and add microtransactions. They worried about the features and races and the quality of the AI.

Their love and passion for the originals was evident whether they were praising us or criticizing us, and we understood that we were responsible to them as well as to ourselves and to all of the players who had never played the originals at all.

Inside Indie: A lot of players must have played the original trilogy, and must have had a diverse amount of feedback. How was recreating a game with such a passionate fan base?

Chris: Sometimes it was scary to have such an awesome responsibility for a legendary title, but mostly it was great to see the fire in their eyes as they recalled their youth and the fun they had playing those games back then. Creating that same feeling for a new generation of gamers has been our core goal, so understanding how the series brought such engagement from its fans in the 1990’s was key to our success.

Of course, we can’t do everything, especially when large groups of players want features that are mutually exclusive or don’t work well together, but we did listen and weigh all of the opinions we could find when making decisions about the game’s content.

Inside Indie: A lot of early access players with enthusiasm must mean a large amount of playtesting. Did you have to change your approach to QA?

Chris: Aside from taking a lot of feedback from within the community on the forums, we also conducted frequent playtests and UX tests to gather the opinions of less hardcore players. We did this in multiple regions, and also gathered feedback from the various forums in each region. We also had both an internal QA team inside of NGD Studios and two other teams working for WG Labs to track down bugs and localization issues.

We included a bug report tool inside the game that automatically created bug fix tasks for us, and we managed a large backlog of bugs which we brought down to near zero by launch. Since this is the first game from WG Labs and the first time Wargaming has worked with an external partner studio, we didn’t change anything – we invented and established the process as we went along.

Inside Indie: Is there something in the game that you gave a little bit of extra attention? Something special, that has a touch of Chris?

Chris: When we decided to add an extra race as bonus content, we had very little time to create new art and assets, so we decided that modifying the Human race would be the easiest way to create something new that would set the game apart a bit while not interfering with core game development.

I proposed that the Terrans should be based on the infamous people of Khan from Star Trek (also with some homage to the Star Trek episode Mirror, Mirror), to give us an alternate view of what humanity could become if we’re not careful about our future. It’s one of the most popular races played in the game now (along with Humans and Psilons). Also, I have been told I look a little like the Human President. A coincidence, I assure you…  😉 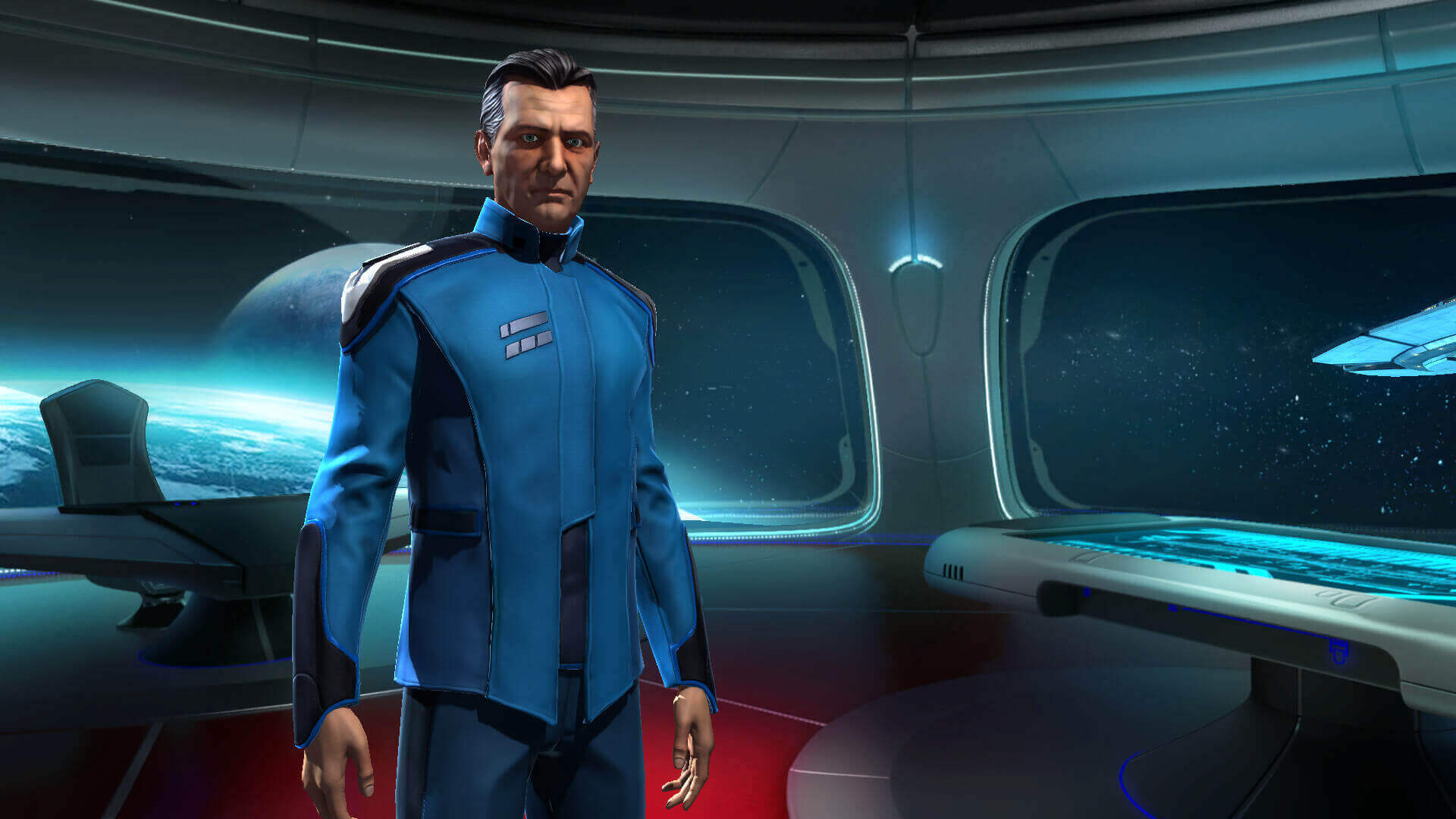 Inside Indie: I would like to end this interview with many thanks, and my last question:

What did you enjoy the most about working on Master of Orion?

Chris: You are very welcome. I couldn’t begin to express all of the many things I enjoyed about working on this game. From working with the original masters, to directing famous voice actors, to watching this amazing franchise come to life before my eyes every day.

The best part though would have to be the people I worked with, especially at NGD Studios in Buenos Aires (where I sit right now as I wait for the official launch in 2 hours!) and our production team in Austin, Texas. An incredible bunch of passionate professionals with the talent and skill to back up their excitement.

We are happy, and feel privileged, that Chris took the time to do this interview.