HMS Gallant (H59) was a G-class destroyer, built for the Royal Navy in the mid-1930s. laid down by Alexander Stephen and Sons in Glasgow, Scotland on 15 September 1934, launched on 26 September 1935 and completed on 25 February 1936. Excluding government-furnished equipment like the armament, the ship cost £252,920.[4] She was assigned to the 1st Destroyer Flotilla of the Mediterranean Fleet upon commissioning The HMS Gallant was then transferred from the Mediterranean Fleet shortly after the beginning of World War II to the British Isles, to escort shipping in local waters. She was slightly damaged by German aircraft during the evacuation of Allied troops from Dunkirk (Operation Dynamo) at the end of May 1940.

Following repairs, Gallant was transferred to Gibraltar and served with Force H for several months. In November, the ship was transferred to the Mediterranean Fleet, where she escorted several convoys. She struck a mine in January 1941 and was towed to Malta for repairs. These were proved extensive and Gallant was further damaged by near-misses during an air raid in April 1942, before they were completed. The additional damage made the ship uneconomical to repair so she was scuttled as a blockship in 1943. Her wreck was broken up in 1953. 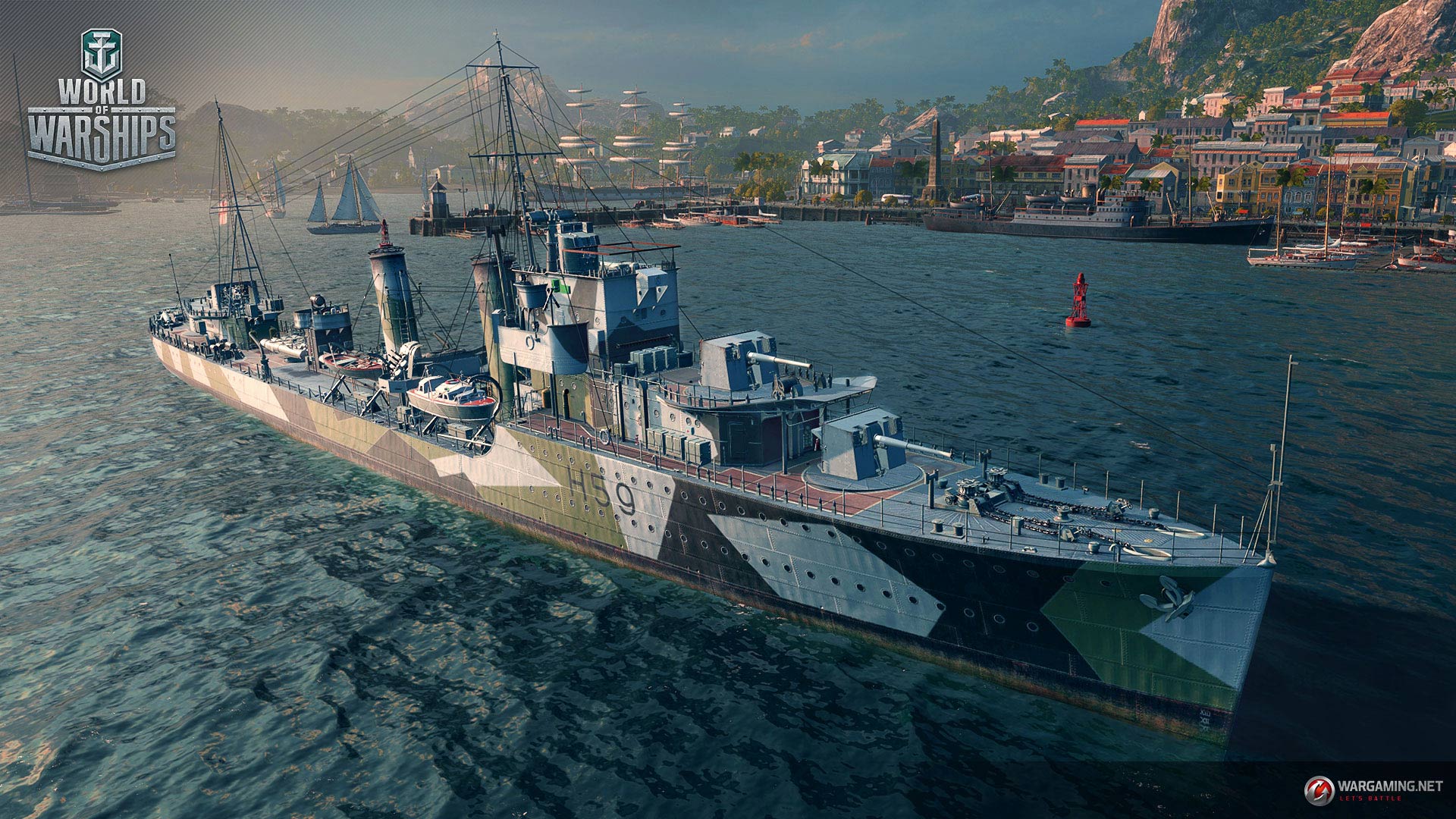 When World War II began in September 1939, Gallant was in the Mediterranean, but she and her entire flotilla were transferred to the Western Approaches Command at Plymouth in October. After a boiler cleaning, the ship was reassigned at the end of the month to the Nore Command in Harwich for patrol and escort duties. On 2 February 1940 Gallant and her sister ship, Griffin, rescued the crew from the oil tanker British Councillorwhich was sinking after it had struck a mine.

The HMS Gallant took over escorting Convoy HN 12 after the destroyer Duchess was sunk on 18 February and she rescued 12 survivors from the Swedish ship Santos near Duncansby Head a week later. On 20 March 1940, she escorted the armed merchant cruisers Cilicia and Carinthia after they collided. The ship was refitted at Southampton between 28 March and 30 April and rejoined her flotilla at Harwich the next day. During the evening of 9/10 May, Gallant and the destroyer Bulldog rescued most of the crew of the destroyer Kelly after the latter ship was torpedoed by a German E-boat in the North Sea.

While Gallant was participating in the Dunkirk evacuation, a near miss by a bomb on 29 May knocked out her steering and caused minor damage to her hull and electrical systems. She was repaired at Hull and encountered a German mine-laying sortie on the evening of 5/6 June off Lowestoft when in company with the destroyer Walpole. Later in June, the ship was refitted in Chatham Dockyard with a 12-pounder 3-inch (76 mm) anti-aircraft gun that replaced the rear torpedo tube mount. 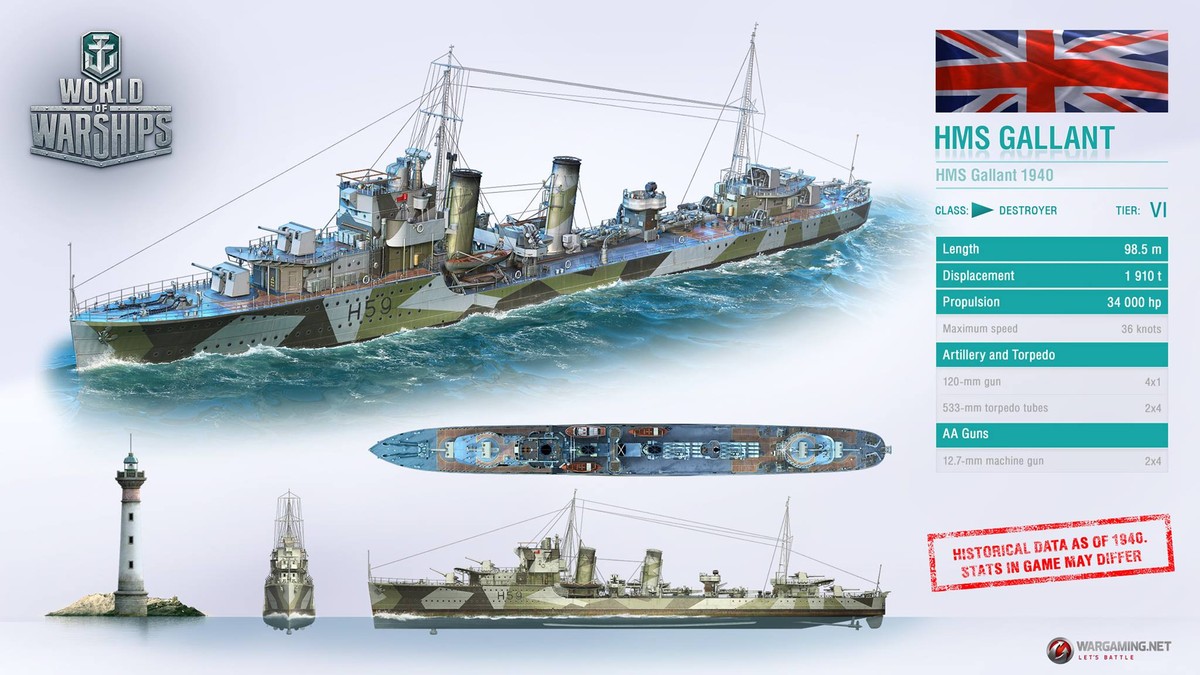 But now let’s go back to the HMS Gallant. How is the Gallant holding up in World of Warships?

First of all, it’s a G-class destroyer, but it feels more like a hybrid ship. In other words, the torpedo’s do indeed a decent amount of damage, but your detection range is above average. This means it’s really hard for you to get close enough to do the damage you wish to do to your enemies. Thank god for the smoke screen you can set with the HMS Gallant. Also, when you progress in the game, your captain will get better and you can use Concealment Expert to make sure it get’s even better to play with this ship, but it takes some time.

And then there is more; the torpedoes on this ship. You also have 4 x 120mm CPXVIII canons. Which looks nice, but the turning speed of the torpedoes are not that fast. Also, the range is distinctive enough to become a game changer. So, when you do some damage it’s a decent amount of damage, but once again, you need to get up and person with your enemies, which is something you might not want to try with this average ship. You might sink before you do some damage. 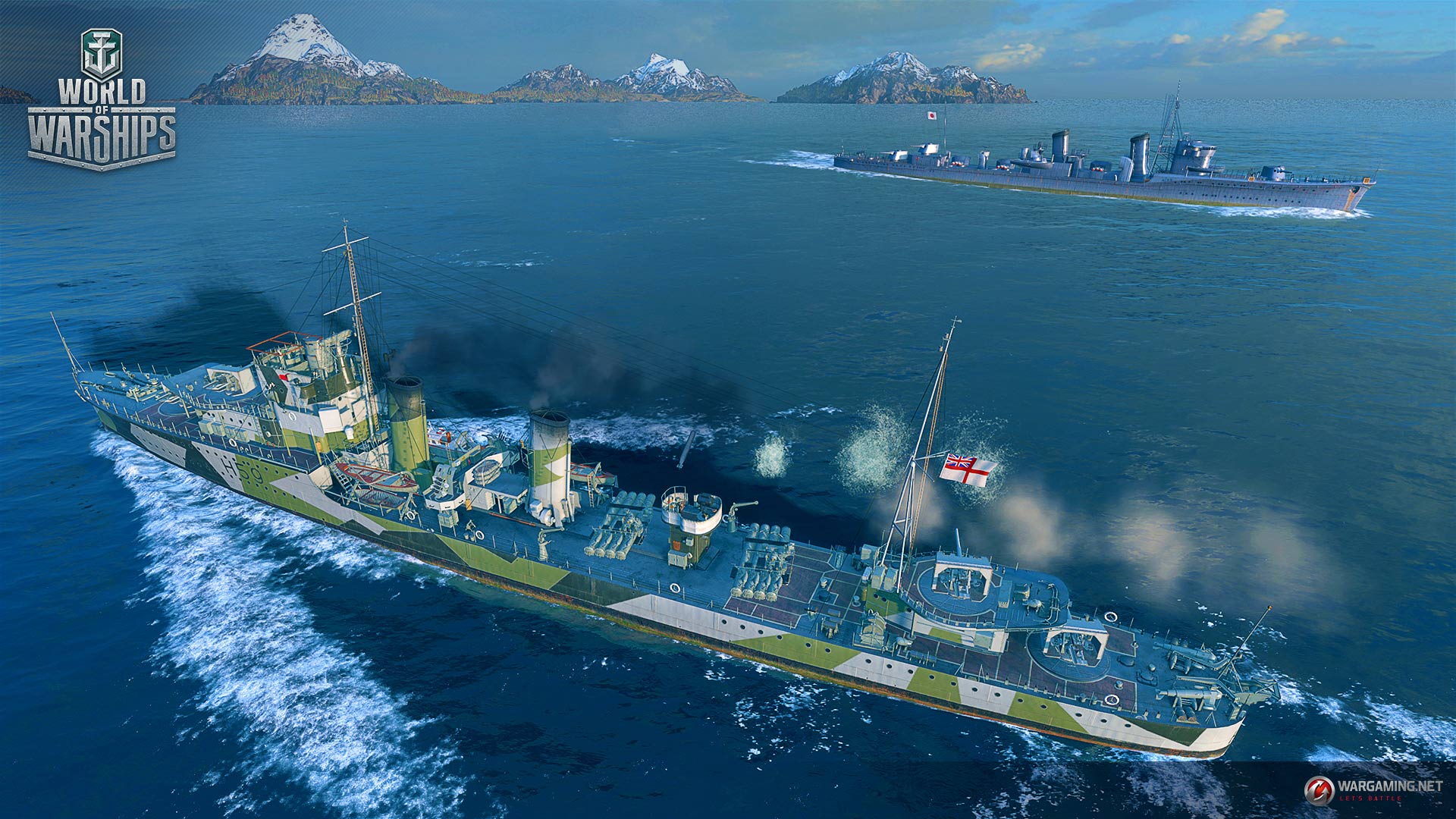 And last, and also as least; AA. The AA on the HSM Gallant is something that does not make a difference during a game. Yes, you do have AA, but the 1,2-kilometer range is not that much. Next, to the short range, the AA is not that good at all. This means you might take down a plane or 5 during the Dynamo mission, but that will only be possible when you are helping your own fighter planes and stop right under the planes who are fighting (near the end of the mission). Otherwise, you will be lucky to get 2 or 3 during the mission. But in a battle, you are lucky if you get at least one plane. In other words, you can turn off the AA to make you ship more concealed towards the planes, with the HMS Gallant this is probably the only way to use your AA, which is not at all.

The HMS Gallant is a ship with an outstanding history and mediocre characteristics.